Living a story worth telling. Shining a light on stories worth sharing.

Living a story worth telling. Shining a light on stories worth sharing.

Resume number 142 just went out. I of course am exaggerating, but only slightly. I have averaged approximately one resume a day for the past three months. Only in the past three weeks did I narrow down my job search to the Manchester, NH area, so that may or may not mean I should count any job applications previous to that.

Starting a new career after working at the same family business for the past 10+ years is generally terrifying, but simultaneously exciting. Starting over in any facet is terrifying. But fear is a terrible reason for remaining where we are.

That is the conclusion I came to as I stood in line at Marshall’s today and that damn Pink song “Who knew” started playing. This was following an amicable meeting with my soon-to-be ex over coffee.

I almost burst into tears and dropped the gifts I was buying for my sister’s bridal shower. How F’n ironic to be in the middle of a divorce and be hosting a bridal shower – Not the easiest task to be assigned, but then again ”easy” ain’t my calling card.

The tears I was fighting back? They exist for several reasons. Believing that “forever” is FOREVER and being dead wrong hurts – That’s tear number one. Being so damn discouraged and exhausted from trying to put my life back together – Tear number two through 15.

So after fighting back approximately 15 tears (one for every year we’ve been married I may add) I checked out and stepped into the balmy evening. It has been raining on and off all day, and a stunning rainbow streaked across the sky, just above my car. The subtle reminder I needed that although this sucks, God loves me enough to promise me that He will NOT let me drown. Possibly the only promise that I will buy into at this point in my life!

I have to start over, and that’s exhausting and overwhelming. But I get to start over… I GET TO START OVER! The truly puzzling question is NOT “Why is this happening to me?” rather than “Why didn’t I press reset sooner?!”

1) Let’s not sugar coat this… Starting over is scary! Be it a career or a relationship, starting over implies being out of our comfort zone. But guess what? THAT is exactly where we must be for the magic to happen 🙂

2) To start something new we must close the door on the old. Until recently I equated this to quitting. DNF-ing a race or a relationship (An acronym from racing that stands for “Did Not Finish”) was all the same to me. It just wasn’t an option! If you crash, then you wipe off the blood and run with your busted bike and bleeding elbow. End of story!

And then life punched a shit load of holes in my logic. Did I choose to be unemployed AND single? Not exactly. 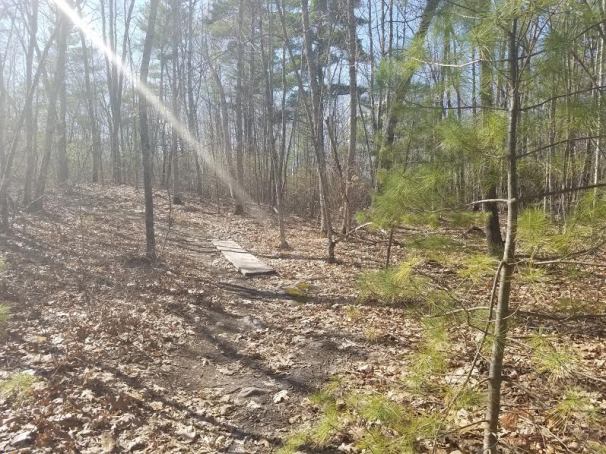 But after several commutes back and forth to New Hampshire, and one enlightening trail run in Amherst (which involved getting lost and finding myself) it occurred to me that being afraid of starting over, paired with the fear of being deemed a quitter are equally insufficient as reasons for remaining where you are when you know in your heart that God is calling you to start over.

I do not recommend waiting for God to cut off every branch you are clinging to so you will let go and receive His best for you. But sometimes that’s what it takes. Sometimes you have to lose it all to find out what you really want. And when you do? Run like you are on fire toward your wildest dreams, whether they be as small as a tiny house or as big as an ultra marathon!